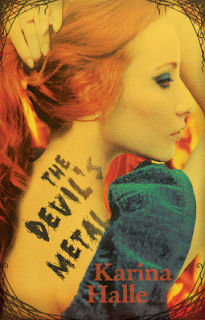 Synopsis Obtained from Amazon.com: It’s the summer of 1974 and 21-year old Dawn Emerson has only three things she wants to do: compete one last time in the Ellensburg Rodeo, win back her ex-boyfriend Ryan, and become the best damn music journalist at Central Washington State College. But all her plans are left in the dust when she’s contacted by Creem magazine to go on the road with one of her favorite groups, the up-and-coming metal band, Hybrid.

At first the assignment reads like a dream come true. Not only will Dawn land some much-needed credibility as a female music journalist, but she’ll finally get to experience life from the other side of the stage, and maybe crack the drunken, enigmatic code that is guitarist Sage Knightly. Instead, Dawn finds herself on an aging tour bus filled with ego-maniacs, band politics and a whole lot of sex, drugs and rock n’ roll. When monsters start showing up in dressing rooms and some of Sage’s groupies become increasingly strange and dangerous, Dawn discovers the band is not only going places – they’re going straight to Hell.

And Dawn has a backstage pass.


'The Devil's Metal' promises a ride through the worlds of sex, drugs and good old fashioned rock and roll, and I have to say that it deliverers. Boy does it ever deliver in the best way possible. At first glance the plot seems to be very straight forward, and exactly what the synopsis describes. However this novel surprised me with all its intricate, subtle details. I can honestly tell you that this books is world's more complex than it first appears to be and it is absolutely wonderful.  I cannot stress that enough.

The first two or three chapters are a little on the slow side, as it lures you into the world that Karina Halle has so masterfully created. In the beginning there were parts that almost seemed too cliché. An example being the way the main characters, Dawn, brings a lot of attention to how hard it is being a female in the music industry. Then naturally, Dawn has a chauvinistic male rival. That said these clichés that occur in the beginning only lulled me into a false sense of security, right when I thought I knew what was going on -- little subtle hints here and there shook that security to the core as the story ploughed forward at a satisfying pace tearing my assumptions apart.

I think a major part of what made this book so great, apart from the amazingly executed plot was the characters. The characters felt so real and genuine. Each had their own carefully crafted personalities and flaws, and their relationships with each other were understandable -- and again, real. I loved some, I hated others, either way the characters made me feel (hell, I would've loved to be in Dawn's place hanging out with them -- if I weren't so incredibly genre savvy and good at avoiding dangerous situations! Ha!) and I loved it. Also, I don't say this often, but my god, the love interest -- Sage -- was absolutely smoking. The romance in this book pops up a bit late -- but it is very believable and develops slowly over time, in other words -- I ate it up willingly (again, something I REALLY don't say often).

The descriptions in this book are incredibly vivid without being over the top, even at points where Dawn was taking a paragraph to describe each character in detail didn't bother me because it made sense for her character to do that as a huge fan of the band. The prose is highly polished and a delight to read, and when things get creepy (or in some cases horrifying) Karina Halle seemed to know just what to say to chill me to the bone. Don't even get me started on the steamy sex scenes that littered the novel. Not only were they well written, they weren't just there for fuck's sake (pun intended), they added to the story and moved it forward.

Before I finish I do want to take some time to say that I also really enjoyed how the author approached the equal rights movement. Right from the get go Dawn makes it clear that she's a woman trying to make it in a male dominated field.  Yet, at the same time she looked down her  nose at the "groupies" that chase the rock and rolls stars of the book. On several occasions she throws the word 'slut' around, and indulges in 'slut-shaming' rather often. At some times this got on my nerves a little since I find it hypocritical, however whenever it go to be too much some other female character would chide her for it quite directly which I really liked. The main character struggles with this concept a bit and it was nice to see this small subplot play out and it really added to the depth of the characters in the story.

The story pulled me along offering little tidbits of information here, a bit of spook there that had me completely in suspense and clinging on to every word.  When things really start to heat up and take a turn for the terrifying, starting with a sudden death, the story barreled to the finish like a freight train dragging me along with it at the edge of my seat.  Needless to say the story and its characters had me absolutely hooked.  I'm waiting for the next novel with baited breath and in the meantime I'll be checking out the other books this wonderful author has to offer.