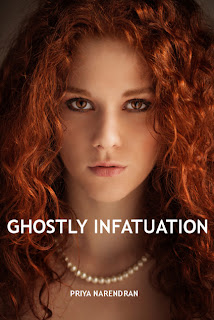 Title: Ghostly Infatuation
Author: Priya Narendran
Stand Alone or Series?: Stand Alone
Genre: Romance
Publisher: Amazon.com
Publish Date: January 17th, 2013
Pages: 88 (pdf)
ISBN: B00B2TZRK6
Obtained: Review Copy Obtained Free From Library Thing
Synopsis obtained from Library Thing: Seventeen year old Harvey Webster has a tough life. He's bullied at school, he doesn't get on with his father and the girl he likes ignores him. He gets a job at a dilapidated manor house which is owned by the eccentric Mrs. Roberts. One day, the house is transformed to a hundred years ago and Harvey meets seventeen year Alicia Ann Roberts. Alicia is exceptionally beautiful and elegant and Harvey is besotted with her. The two teenagers start meeting up whenever the house changes time and soon fall in love. Unknown to them, the house holds a terrible secret that threatens to destroy them both. Some profanity and violence.

Note: Hey guys, sorry about the lapse in reviews, spent the past view days sitting in bed watching Chef Ramsey's Kitchen Nightmares on Netflix. Well, listening to it at least as I was as sick as a dog and my poor eyes couldn't really focus on anything without becoming Niagara Falls. In any case, still recovering but I should be back to my regular posting speed soon! Thanks for baring with me!

Yes, I know, I know. For someone who claims to dislike romance novels a lot of them end up in my reading pile for one reason or another. This one admittedly was because of the pretty redhead on the cover. Shame on me, again, I know -- I have a weakness for nice looking covers and redheads, what can I say? In any case, at eighty-eight pages this is a short read and I thought it would be a nice quick breeze through. Unfortunately, I struggled to finish.

The main problem I had with this book is that I could not get used to the awkward, 3rd person omnipresent prose the author used, and this is coming from someone who prefers 3rd person (as opposed to 1st person) novels. The entire book is basically an info dump that doesn't leave anything to suggestion, or imagination. The pasts and feelings of all the characters are told in a very blunt fashion.  Not only that but the dialogue was very hard to swallow, it was incredibly clichéd, to the point of being astoundingly cheesy. To say the least it made the characters unbelievable. It actually reminded me of a poorly done Hallmark film.

The situations that occur in the book are over the top, that doesn't help the overall believability of the story. The main character, Harvey is smart kid that gets beaten up every day by bullies. His teachers even bully him constantly, and do nothing to stem the stream of violence towards him. The main bully at Harvey's school is obsessed (to a scary extent) with Caroline, a childhood friend of Harvey's, whom he share an attraction with at the beginning of the novel. Caroline, is a girl who is not used to people ignoring her, craves attention from anyone she can get it from and constantly teases Harvey with the promise of an intimate relationship without any intention of doing so. Harvey's home life isn't much better with an abusive father who bullies him and his mother -- and an older brother who's seemingly perfect until the family finds out he got his girlfriend pregnant.

Yet -- in spite of all these intricate characters -- the relationships are still hollow. In spite of all this background, the characters themselves felt like cardboard cut-outs (which is a side-effect of all telling and no showing).  In spite of this I found myself loathing the main character. I couldn't connect with him, and quite frankly didn't want to. The over the top reactions he had to the smallest situations turned me off completely -- he came off as a brat instead of a victim. On the flipside, in situations where a strong reaction was called for, he flopped around like a wet noodle.  This is unfortunate because the author definitely has the framework and talent there to create a cast interesting characters.  However I think, personally, they need to spend more time developing them and their place in the story.

In the end, spending more time with the story might have saved it. The prose needing polishing and better pacing for sure. It felt like it was rushed through, which is a shame since the author really does have potential, and very interesting ideas to share. The book read like a plot outline -- it needed to be expanded upon and refined.