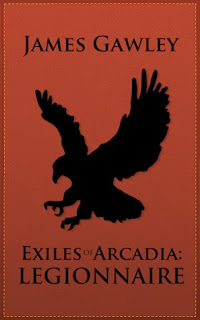 Primus Seneca has lived most of his life in exile. Ten years ago his father led an army against the ruthless tyrant Tiberius–and was crushed. Now the general plans his revenge from the snowy heart of the Boreal forest, and sixteen-year-old Primus is eager to join his father’s legion. But once he is sworn in, Primus begins to unravel family secrets that will shake his faith in the cause, his father, and the very nature of the gods.

'Legionnaire' is the literary debut of author James Gawley, a PhD student in Classics at the University at Buffalo. Read more at www.exilesofarcadia.com.

"Pray all you like. You cannot command the gods."


I was a bit reluctant to start reading this book I admit, I liked the synopsis -- but I am guilty of judging books by their covers and this one didn't really inspire confidence.  I'm glad to report however that upon finally reading it I could not put it down! I was up until 5AM in the morning reading this book non-stop while in bed.

The book has a solid start, rich with political intrigue and hinting at what is to come, displaying the unrest in the land of Arcadia before moving to the rebel group that was exiled and the story of a young legionnaire - Primus, a general's son. The story is rich with flashbacks that add to the characterization of Primus quite nicely although at times the transition from present to past was a bit jarring -- but nothing too bad.

What impressed me the most was the amount of  world building that went into the creation of this book. It was very detailed at times although there are a group of what I assume are a barbarian people called the Woade that were present that weren't ever truly explained and I wish they were. There are lots of characters that are described as being Woade or part Woade  and are distrusted for it. Although the confusion and curiosity didn't take away from my overall enjoyment of the book.

The fight scenes in this book were very well done and the descriptions of what goes on are particularly brutal. What I enjoyed most about this book however is that the characters had real consequences for their actions. There was one point where Primus had to hold down his friend as the foreman of the lumber mill hacked off his legs with an axe in attempt to save his life -- as they were stuck under a gargantuan felled tree.  This experience haunts Primus and other characters even judge him for it.

I really enjoyed the author's flowing prose, and how the history of the world was told in a way that also revealed interesting things about the characters that were explaining it. I loved that it wasn't just an info dump. Each chapter also includes a little quotation from some of his characters, or bits of worldly lore that really help set the tone of the piece and even adds more intrigue to the plot in some cases.

The character development of Primus was excellent, he is an honorable solider in a world of lies would desperately wants to be seen as brave to gain approval from his father, and you can see the changes this want has on him throughout the novel. I appricated the fact that the Primus at the end of the novel wasn't the man he at the beginning. I look forward to seeing more of him in future books.